A long long time ago, we were in a band called the Six O Clock Saints.
During our shows, we projected remixed animations and found movie footage
that matched the tone of our set and we, from time to time, would throw our own
films and shorts into the mix. The classic countdown (or STMPE leader)
was one that we projected at every show for years and we loved it...
until we were hit with a cease and desist.

As it turned out, we discovered that this particular countdown was still owned and
created by Universal Pictures. So using it was a no-no.

So Aljax re-drew and animated every frame and, along the way, changed all of
the static images (or film notes) that occur before the 10-9-8- -  to read
Six O Clock Saints. Now we had our very own countdown to project at our shows.
Mission accomplished.

One of the Saints frames from the beginning. 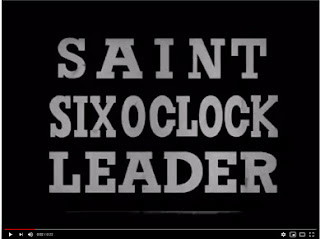 Here is the scribble (that scrolls upward really fast) tiled together to reveal a surprise.

Then a crazy thing happened, it was uploaded to youtube in 2007 and the vid went
viral (it has over 1 million views). It was downloaded thousands of times and used in hundreds of other folks videos (usually with the end cut out.) Sometimes it was just re-uploaded by other folks as is.

Posted by T-bone & Aljax Illustration, Production, and Design
at 5:00 PM